Why React Native is Becoming Popular for App Developers? 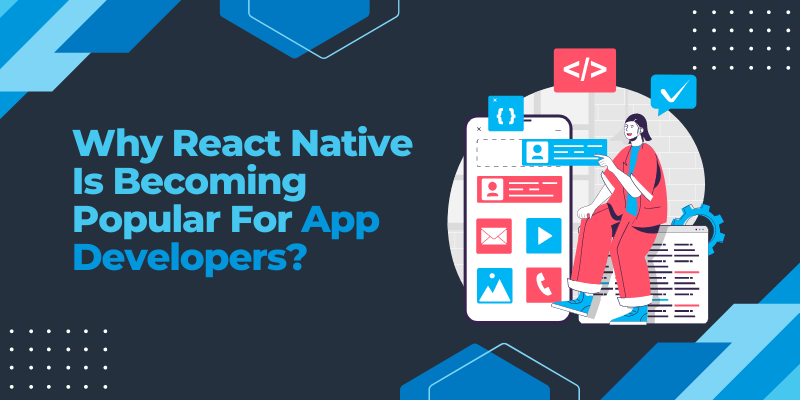 React Native, a framework created by Facebook is the best cross-platform choice for mobile app development. It aims at providing developers with a lightweight application-building framework that can make use of native APIs while still running on a regular browser. The purpose behind the introduction to React Native is to create a new way of Mobile App Development without getting in between the back end and the front end. It allows you to build native apps that run on iOS and Android using JavaScript, HTML, and CSS.

The community of Top Mobile App Developers In Singapore and other places recommend React Native because it is comparatively small to MVC frameworks. In addition to seamless development, it enables the business owner to build apps for users compatible with multiple devices and operating systems.  Its ease of use, robustness, and reliability makes it the popular choice among app development professionals.

In this write-up, we will cover the overview of React Native, what are its features, and why it is the popular choice for mobile app development.

As the developers can reuse the coding across mobile and web devices, the overall procedure becomes less time-consuming. The developers can ask questions or provide answers to queries as the framework is open-source with a huge online community.

Code Reusability to Save Money and Time:

The code reusability convenience saves the developers from building the codes from scratch every time they want to create an application. It saves a lot of time, increases efficiency, and results in responsive and fully-functional apps. Additionally, the entire mobile application development procedure fastens as all the UI and open-source libraries are available by default.

The best part is if the company’s web application is already operating on React, its coding is reusable for mobile app development. Isn’t it great!!

React Native framework mobile application development comprises core functionality: live reloading. It allows the developers to modify coding in real-time and fix the bugs while the app is loading.

The code reusability defines ease and saves time during the mobile app development process. The live reloading further defines the functionality. It makes the procedure even more efficient, quick, and intuitive. The live feature loads all the changes made throughout the entire application automatically.

Besides, hot loading is available that only shows the changes made to the specific app section. This way, the complete creation of an app and its testing phase becomes easy.

The components in React Native work in tandem with the native ones. Developers can now draw user interfaces far more quickly as a result. Compared to other native apps, the apps are edgier and more authentic.

The fact that this framework complies with native applications is its strongest feature. It permits simple integrations with the current code. Thus, assuring real and quick extensions are added to all the existing native apps.

The React Native platform is getting better every day. It entails ensuring that every element of the framework can satisfy the unique business requirements driving the development of a mobile app. The RN comes with 2 third-party plugins, which is fortunate. Native and JS-based modules are among them.

It makes it easier for app developers to incorporate Google Maps into their mobile applications. They can also connect any plugin to a native or third-party module.

React Native framework allows the application devs to utilize similar technology to those of other platforms. All of this assures easy-to-learn, fast-to-create, and reliable mobile apps. The tools and techniques will be the same for building apps, whether it is for an Android app or the iOS one.

As a result, the animations, smooth performance, and user interface flexibility can be experienced when building functional prototypes.

React Native has a lot of unique and exciting advantages to offer to mobile app developers. But first, you need to understand your business concept and which of the technologies would fit in right. After all, not all frameworks are designed for a one-size-fits-all approach.

React Native is the preferred framework of almost every Web Development Company In Singapore. The reasons are:

Besides, this software framework is cost-efficient as it is already an ecosystem comprising all the libraries and modules required for mobile app development. Isn’t all of this great!!

Why React Native is Becoming Popular for App Developers?