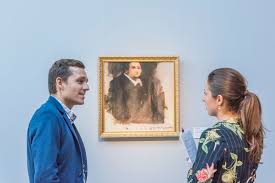 Speculators and affluent collectors battle it out in opulent salesrooms for the best works of art when they hit the market, a spectacle enjoyed by the crowds of onlookers who gather to see the action. For the art market, successful auctions are seen as a sign of further growth, while poor auction results can harm market confidence. It’s a lot of fun to watch, with record prices creating gasps and cheers and famous bidders causing a stir for those who are knowledgeable. An art auction in Sydney might appear to be incomprehensible riddles to those who are unfamiliar with its baroque logic.

Art is very popular in Sydney. Many people in Sydney like to collect prominent art pieces. They appreciate and know the value of various art collections. Hence, they regularly participate in art auctions to buy exquisite art pieces.

This is the sale’s MC. A superb showperson, frequently British at the more upscale auction houses in Sydney, can entice even the most reluctant buyers to pay extraordinary amounts with a combination of comedy and high drama. Edgy and outspoken auctioneers may be found in the newer generation of modern art auctioneers.

Here’s the auctioneer’s Excalibur, which is handled similarly to a baton or judge’s gavel, and when it falls—either lightly or forcefully—it signals the end of the auction.

This is the auctioneer’s platform, where the hammer typically lands and behind which the auctioneer stands. Even if white-gloved handlers stride behind the auctioneer or present the piece on a screen when it “goes on the block,” the work is presented before bidding begins.

Bidding can be signalled with these number-coded instruments, like the snobbish relative of the ping pong paddle. However, many high-flying purchasers prefer to notify the auctioneer with signals they’ve planned ahead of time. They may be used in situations as essential as a nod or as complex as a language with several bidding expressions.

In a specific round of bidding, this is the technical phrase for the job in question. The term “a lot” refers to a collection of works that might include more than one.

This is the auction house’s experts estimate the worth of a particular item based on the current market.

The auction’s on-staff connoisseurs are responsible for gathering the artwork, determining its market worth, and placing it in historical perspective for the catalogue in Sydney. In modern art, for example, Chinese ceramics and artworks, specialists are highly qualified individuals who travel the world to survey private collections.

This is the auction house’s estimate of how much a piece of art may sell for at the auction, and it is published in the auction catalogues as a bracket around the appraisal. In Sydney, it is typically expressed in the style of “$14,000,000 – $18,000,000,” or a variation thereof; it contains a low and high estimate. Each piece has a price estimate and a price estimate for the entire collection in Sydney.

A consignor’s minimal price will allow an auction house to sell artwork, implying that the item is purchased if bidding does not reach the reserve price.

The auction house sends a glossy, nicely prepared brochure with estimates and descriptions of the items up for auction to pique the interest of collectors and potential buyers. It is not uncommon for a large art auction in Sydney to spend $1 million on a catalogue, employing prominent art historians and photographers to argue why a piece deserves to be sold for enormous sums.

The cover lot is the artwork featured on the magazine’s cover and the piece that the auction house expects to create the most significant interest when it goes up for an art auction in Sydney.

Premium is the additional fee that the auction house charges on top of the hammer price, which can be anywhere from 10% to 20%, depending on the auction house and the item’s sale price. The buyer’s premium is usually included in the final price quoted in auction reports and records.

All You Need To Know About Pre-Workout Supplements