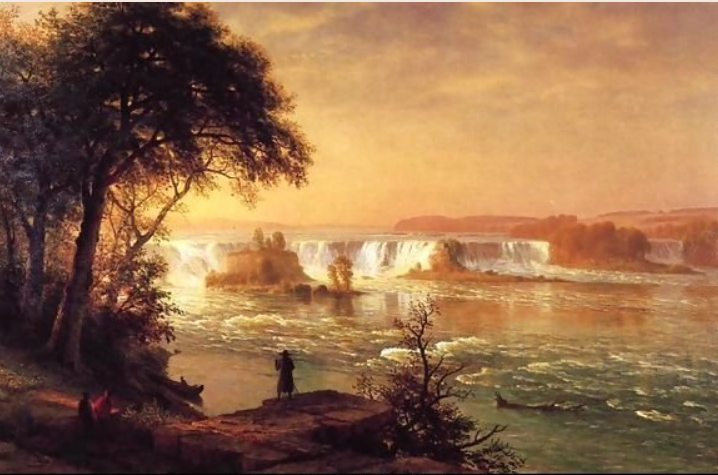 Albert Bierstadt is the German-American painter who is best known for his lavish and sweeping landscapes, including famous waterfalls, of the American West. He was born on 7 January 1830 in Solingen, Germany, and died on 18 February 1902 in New York. He moved to the US with his parents when he was one year old.

As a young man, he joined many journeys to the American West to create paintings, make sketches of, and gather information about places where very few Westerners had been at that time. There were many artists before him to record the sites. However, he was the foremost painter of West American landscapes during the 19th century.

He created more than 500 paintings, and some art academics believe there could be more than 4,000 paintings. Many of his landscapes depict waterfalls.

His technique was to create small oil studies, pencil sketches, and photographic images. He then used these sketches and small paintings to make more significant works back in his studio. His work was not fiction but portraiture. The landscape “Yosemite Valley” (1866) demonstrates his typical technique for creating medium-sized paintings. He used opaque paint with few brushstrokes.

The more significant works painted in his studio do not have the spontaneity of the more miniature paintings painted on the spot, but they are immense in scale and exquisite in effect.

It is accepted that Bierstadt altered details of landscapes to create the effect of awe. His colors were applied according to a formula and not necessarily according to observation. The water was almost always ice-blue, and the mountains atmospheric blue-green.

Bierstadt painted his rugged but romanticized landscapes of the Western regions of America on a grand scale with a lot of detail and dramatic lighting. These works captured the imagination of 19th-century art collectors. As a result, his paintings sold at record prices, and Bierstadt was an artist who was privileged to enjoy tremendous success and recognition during his lifetime. For example, his “Rocky Mountain, Lander’s Peak” was sold for $25,000 in 1865.

His beautiful and enormous paintings of the American West found their way into public and private collections.

End of the Period of Fame

Unfortunately, fashion changed, and by the end of the 1800s, art collectors’ interest shifted to the new impressionist styles.

Bierstadt died suddenly in 1902, and it seemed as if the art world had forgotten his work. Since the 1960s, however, people have become more interested in preserving the national lands of the USA again. This led to his paintings beginning to be exhibited again.

Many paintings in Bierstadt’s landscape portfolio are paintings of waterfalls in the Rockies and other mountainous areas, especially in the American West. Three of his well-known waterfall paintings are

Albert Bierstadt’s fame started with his series of landscapes of the Rocky Mountains. The series included many waterfalls. All the works in the series were based on sketches he had made on a United States government expedition to the area. The trip was commissioned to map an overland route to the Pacific.

In 1863, he undertook a second trip to the American West with a group of artists to visit the valley of Yosemite. The painting “Cho-look, the Yosemite Fall” depicts the large scale and natural majesty of the Yosemite Falls. He painted a grove of oaks and cypresses in the foreground with several men gathered at their camp. In the right corner of the painting, he also added a sketching umbrella, a color box, and other objects that he always had with him.

In “Rocky Mountain Waterfall,” Bierstadt captured the gorge and cascading falls in “photographic” detail. He painted the soggy moss growing on the rocks and the surrounding lush greenery with careful detail.

The Falls of St. Anthony

In 1880, the artist painted “The Falls of St. Anthony.”. It is an oil landscape that shows the spillway and the falls. Bierstadt painted them as they appeared before human interference. Also, he painted several Native Americans in the foreground and a hatted figure with a walking stick. It is speculated that this figure represents Louis Hennepin, the discoverer of the falls.

Did you know Mount Bierstadt in Colorado is named after the artist? This was because of his “documentation” of the American West through his paintings, including his waterfall paintings. Mount Rosa in Colorado was named in honor of his wife, but later it was renamed.

The United States Postal Service issued 20 commemorative stamps. The collection was entitled “Four Centuries of American Art,” and Albert Bierstadt featured on one of the stamps.

Where to View his Paintings

This article indicates that Albert Bierstadt is best known as one of America’s earliest and most successful premier western landscape artists. His paintings also encouraged tourism to the American West, and historians believe that his paintings might have influenced Congress to protect Yosemite as a national park.